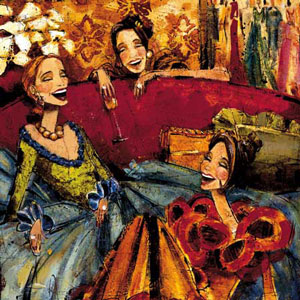 I recently went to my allergist to be retested for certain fruits that have lately been causing me extreme stomach pain, lip throbbing, nausea, and internal palpitations.

As I breezed through filling out the medical forms, one question, in particular, gave me pause.

How many alcoholic beverages do you have a week on average? I lied. Bigly.

After my tests, my doctor wrote down the following fruits to avoid: Cherries, blackberries, peaches, plums, and grapes.

She further explained that as part of getting older, my body chemistry is going through a change, thus all of the new allergies I have developed. The cursed female change wasn’t enough? And hello. DID MY ALLERGIST JUST SAY TO AVOID GRAPES?????

“What about wine?” I asked her hesitantly.

“Yeah, I’d definitely stay away from wine for a while,” she said like it was no biggie.

Whoa. Stay away from the vino?

Before I could fully process her suggestion, my allergist followed it up with: “As a matter of fact, I would like you to stay away from all alcoholic beverages for at least a month.”

I was speechless, so I just gave her a super ugly grimace.

Yikes! Her dictate swirled around in my head. This is what she’s asking me to do a week before Christmas???????

Could I actually go cold turkey for a whopping four weeks?

Okay, maybe I could, but definitely not until after the New Year.

After the New Year, I reiterated to myself. But not a day before.

Okay, so I’m at the allergist because my stomach pain is so bad I can’t sleep, I’m throwing up in the middle of the night, my lips are regularly throbbing and swelling, and I have an incessant metal taste in my mouth.

And I’m resisting my doctor’s recommendation, because?

My brain was turning and churning. As I mentally processed if, how and when to stop drinking, I asked myself: Why do I drink?

My allergist interrupted my rambling thoughts: “It seems to me that you’re unnecessarily obsessing over my suggestion. If having a drink is that big of a deal, and you can’t let it go, then have one drink, and don’t beat yourself up over it.”

Gee, thanks, Doc. One measly cocktail.

I responded to my doctor with: “One drink a day? One drink a month? Define one drink.”

“I’m not sure I am in control,” I weakly blurted out, shocking myself at my honest candor.

“Go home, think about it, and do some research,” my allergist suggested as she led me out of her office.

And as most of you know, I am the fact-finding Queen. So I dug right in…

Below is everything I wanted or needed to know about alcohol abuse but was afraid (or just didn’t give a hoot) to ask:

According to the Centers for Disease Control and Prevention, moderate drinking is defined as up to 7 drinks a week for women and 14 drinks per week for men. [There goes that gender gap again.]

Most people who drink excessively are not alcoholics or alcohol dependent.  [Whew. Good to know.]

The economic costs of excessive alcohol consumption in 2010 were estimated at $249 billion, or $2.05 a drink. [What’s a couple of bucks here and there?]

Okay, I was on a research roll. So I kept on trolling:

All kidding aside, after my extensive research, I decided to dip my probably arthritic toe into the no-alcohol water. No plunging head-first for me, though. Not yet anyway.

Starting today, until January 2nd, I have imposed a new alcohol rule on myself: No more than one glass of wine a day, any three days per week. And never two days in a row. So the end result is that I am going to consume no more than three glasses of wine per week through January 1st. Yes, I can, yes I can.

And on January 2nd? I’ll keep you posted on that.

Mother’s Day and Raleigh: My Brother Disguised as a Dog

My Do-Over
Scroll to top