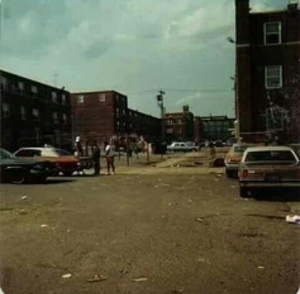 Past the elevated train tracks near White Street is a housing project called Father Panik Village, which makes our tenement look like a palace.

Mem forbids me to cross over to the other side of the tracks. When I ask her why, she explains that “On this side, there’s still hope, but on that side, ils sont finis,” meaning they’re finished.

“Crackers who go to the Panik get shot up with a semi-automatic,” my friends would say, so I never went anywhere near the place.

There was a rumor going around that Father Panik, a Catholic priest, was shot and killed when he got caught up in a gang crossfire there, so they named the project after him. Mem doesn’t believe a word of it, but if a man of the cloth couldn’t survive in there, I certainly couldn’t. When my friends would make bets and offer money for someone to run through the Panik, I always bowed out. It was a great way to make some quick cash, but not for me.

That was until last week when Mom gave me a dollar and told me to go to Steve’s Market for cigarettes and milk. On my way to the store, I saw some friends playing marbles in the old abandoned parking lot in between the train viaduct and Father Panik. The lot is full of wrecked cars, refrigerators, and other junk, so it’s a great place to hang out and hide out.

I stopped to play a quick game of Shooter with them. My friend Trish let me borrow her marbles, and using her prize largest one — the Big Kahuna — I beat them all. When I got to the market, I grabbed the milk, and Steve, the butcher and owner of the place pulled me a pack of cigarettes from behind the counter and rang me up.

I dug into my pocket to pay, and to my horror, the dollar was gone. I told Steve I’d be right back and ran to the lot, my heart pounding out of my chest. We all looked for the money, but nobody found it. Or at least that’s what they all said. I was certain that Mom was going to beat me with her strap, and I started to cry.

“Okay, okay,” said Roland, a chubby kid who lived in my building. “I’ll tell you what — you run through the Panik, and when you get back, we’ll give you enough cash for cigarettes and milk.  I looked in terror at my friends. They all pulled coins out of their pockets and threw them into a pile on the hood of a burned-out Chevy.

“She’s a chicken,” Roland said, waving his hand in my direction. Then he pointed toward the Panik, so I felt like I had no choice. It was Father Panik or the strap. As I reluctantly walked under the stone viaduct, the other kids stayed at the corner watching me.

The girls were yelling for me not to do it, and the boys were making squawking chicken noises.

I stood facing the Panik, watching some black kids standing around a bus stop smoking and laughing. I wasn’t prejudiced — just scared. I wasn’t taught to hate — just not to trust.

Before I could chicken out, I raced full force across the street and into the Panik, whipping past the kids hanging at the bus stop. “You crazy girl?” this one black kid cried out as I sped past him. While running at full speed, I looked back to see if my friends were still at the corner and crashed into a black girl a couple of years older than me. She got into my face and asked, “You lost?” It was just this black girl and me, and I was lost all right.

Then she yelled to someone across the street, and a man yelled back at her. When I turned around, Steve the butcher ran over to where we were standing, put his arm around my shoulder, and led me toward his store.

He turned to the black girl and said, “Thanks, Yolanda. Stop by tomorrow for a soda and chips.” “Arright,” Yolanda answered and gave us a wave. I was too shocked even to respond.

Steve scolded me when we got to the front of his market. “Father Panik is no place for you, young lady. What the heck were you doing in there? I saw you leave my store upset, then watched you run across the street, and I knew no good would come from that. You’re lucky Yolanda was there and not someone else.”

I tearfully told Steve I didn’t want to go home so fast and about the bet and how Mom was going to give me the strap, and I couldn’t stop shaking. “Now, now,” he said.  “Stop that blubbering.”  He took me into his store and bagged up some milk and a pack of Marlboro’s. Then he placed a candy necklace around my neck and gave me a handful of Pixy Stixs and Flying Saucers. “Now go home, and don’t ever try that again. Next time you go in there, you might not be so lucky.”

On my way home, I thought about all the times I had gone into Steve’s Market with Mem and how he would always give Rib treats and offer Mem free samples to try out. She always refused, telling him that she didn’t take handouts.

Every Saturday, after working at Woolworths, Mem would go to Steve’s and buy chopped meat, liver, and hot dogs. And he always gave us way more than we paid for. Even Mem agreed with me about that.

I always thought Steve liked Mem, but the one time I brought it up to her, she got all red and told me to hush. “Men can’t be trusted. They always let you down.  And they’re only after one thing. You’ll see when you get older.” I always wondered what the one thing was, but I figured it must have been bad.

Mem had a real problem with men and always had something negative to say about them. When she would tell me stories about my grandfather, she never said anything nice. She would go on and on about how he deserted and humiliated her — and Mom. The only positive thing she ever said about him was he was tall and that I got my height from him.

The next day at the lot, I told my friends how a gang had stopped me and shoved me and how I had punched one girl in the face and how she ran off crying like a baby, and then the rest of the gang ran off too. I put my right fist in Roland’s face and warned him that if he didn’t give me my money, I would do the same thing to him that I did to Tit and the Panik girl. You bet he gave me the money, and I ran right to Steve’s and spent every penny of it. Yolanda was there, and Steve treated us to Twinkies and cream soda.

Yolanda lived with her grandmother, MawMaw, and the more we talked about our lives, the more we realized how similar we were. Well, except she was black and I was white, which made all the difference in the world.

According to Yolanda, Father Stephen Panik, MawMaw’s hero and a priest for the poor, wasn’t murdered at all. After he died in 1954, the 14-year-old “Yellow Mill Village” was renamed in his honor because, without Father Panik, public housing projects in Bridgeport would never have existed.

And now I know that Father Panik Village isn’t so scary, although Yolanda agrees that at the Panik, people can sometimes get shot up with a semi-automatic.

But the third thing was the best of all because Yolanda became one of my closest friends.