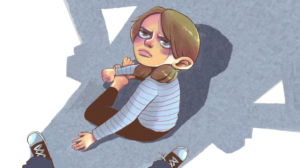 It was August 1960, and I was getting ready for first grade.

I was excited but also nervous. Mem was even more nervous than me because I was going to be walking to school by myself. The walk wasn’t a long one, but I still had to do it alone.

Mom worked from 7 am-3 pm, and Mem worked a factory 3-11 pm shift and was a seamstress during the day. Because we didn’t have a car, they both had to either walk or take buses everywhere, which took a lot of time. Mere Germaine was living too far away to help out, so I was pretty much on my own day and night.

Mom said that moving Mere Germaine back in with us so she could help out was yet another reason why we had to get out of our White Street apartment.

After church, for three Sundays straight, Mem walked with me to the school, warning me about cars, strangers, and stray dogs.

The walk was pretty straightforward. From White Street, we made a right at the corner, then walked up a long hill, and then made another right, and then down a steep hill, where the school was at the bottom, and across the street on the left.

On day one, Mem packed me a paper bag with a jelly sandwich, and a chocolate doughnut from the batch she had made fresh the day before.  She wrote “RR” for right, right, on my right hand in pen so I wouldn’t get lost.

My walk was uneventful until I started down the second hill. There was a group of girls slightly ahead of me. The biggest one turned around and yelled: “Whatchu lookin at?”

I looked behind me to see who she was speaking to, but there wasn’t anyone else there but me. When I turned back around, she was in my face. “I aksed chu a question.”

I looked down at my lunch bag, too afraid to answer. “Watchu got in the bag?” She grabbed my lunch and ran off to catch up with her friends.

Later that day in the playground, I was hungry and didn’t feel much like playing. Plus, every time I looked over at the mean girl, she gave me the finger. When I asked some of the other kids who she was, one girl told me that her name was Tit.

“Who would name a kid, Tit?” I asked, and the girl told me that her real name was Barbara Titone, and she was a bully to everyone, even her friends.

Oh, she was a bully, all right. And husky. And since she was in the third grade, she towered over scrawny me.

After school, I ran all the way home, terrified that Tit was going to come after me.  And those hills were a killer.

When I got to the apartment, it was empty. Mem left for her shift way before I got home, and Mom’s shift was over at 3 pm, but after work, she had a second job as a dance instructor for a local Arthur Murray Dance Studio, so it was me myself and I, until at least 6 or 7 pm.

Between being afraid of the refrigerator, the scary hallway, the shoebox cabinet, and the rodents, I sat at the table in the kitchen until Mom got home, even though I had to pee.

Since the only way to get to the bathroom was through the hallway, there was no chance I was doing that, so the only choice I had was to hold it in or pee outside.

I didn’t mention anything to Mem about Tit, but the next morning I told her I had a stomach ache and didn’t want to go to school. Mem told me she wasn’t having any of my nonsense and to pack up.

For the next few months, Tit made my life miserable. Back then, I didn’t know what a butch was, but if ever there was a butch, Tit was it.

And her name might make you laugh, but there was nothing funny about being taunted day in and day out.

One day on my way to school, Tit was particularly aggressive and shoved me so hard that when I fell, I hit my head on the pavement and wet myself.

I didn’t want to say anything to my teacher about what happened, so I had to stay wet until my clothes air-dried. Tit told everyone at school I pissed myself, and I was humiliated. Plus, my clothes dried all smelly and crusty, and the back of my head was throbbing. That’s when I started to fantasize about how I was going to get back at Tit.

Even though I knew it was hopeless, I needed to take some kind of action because running away from Tit every day was both mentally and physically killing me.

The next day, on what I knew was going to be yet another torturous walk to school, I was feeling brave.

That was until I caught sight of Tit. And like a coward, and before Tit could even grab it, I handed her my lunch. So much for bravery.

I let out a roar, and in a fit of rage, I pounced on Tit from behind.  Tit fell on her knees, and when she rolled over, writhing in pain, I jumped on her stomach and straddled her. Then I punched Tit hard in the face, once with my right fist and then with my left. Tit was holding her hands up to her face and crying. I yanked her hands away and slapped her in the face a couple of times while repeatedly calling her shitty titty.

Then I grabbed my lunch bag, winked at Tit, gave her friends an evil grin, and asked if anybody else wanted what Tit got. While they all looked down at the sidewalk, I roughly elbowed my way through the girls and strutted the rest of the way to school.

We both got called into the principal’s office, and when nobody but Tit was looking, I imitated one of those nasty rats from our shoebox, and put my two hands up like claws, and gave her a creepy bucktooth face. And from what I could tell, Tit was scared titless.

When Mem came to get me at school, she wanted an explanation for why I beat up “Barbara.” I told her all about the Tit taunts, and how I was going to shove her tits down her titty mouth. My dirty words mortified Mem, so we stopped at the church on the way home, where she ordered me to recite the Lord’s Prayer five times. I knew Mem was more worried than mad, though, because she didn’t threaten to wash my mouth out with soap.

That night Mem and Mom spoke together in French to figure out what the hell they were going to do. I knew they used the swear word because Mem said in French, “enfer.”

Mem told Mom she was horrified at my violent actions and words. And Mom told Mem she was worried I was going to take after my father’s side of the family, and that was yet another reason why we had to get Mere Germaine back.

That night, as I laid in Mem’s bed, I wasn’t obsessing about the rats, the mice, the poison, or the cockroaches. I was happily and busily conjuring up all sorts of ideas for how I was going to torture Tit.

Click here for Chapter 7: A New School With a Side of Baptism